Regional markets are reaping the benefits of a recovery in trading volumes in the US and Europe, says the Zawya team of analysts.

Global and regional markets are on a breathless run as they feed on benevolent monetary conditions and improving economic data from the US and Europe.

The S&P 500 and Dow Jones Industrial Index hit new highs this year on the back of continued monetary stimulus from central banks and robust corporate results. Other global markets such as the Japanese Nikkei and the UK’s FTSE posted strong double-digit growth – 35% and 11% – by the end of July.

Regional markets have taken their cue from global investors, but also have their own compelling reasons to march ahead.

Dubai has led the region with a staggering 55% gain by the end of July, on the back of good performance from real estate, financial services, retail and construction companies.
The Abu Dhabi index soared 48% by the end of July, underpinned by a resurgent non-oil sector and, of course, triple-digit Brent crude prices.

Much of the fuel for the regional rally came from MSCI’s decision to elevate the UAE and Qatar bourses to emerging market status. The upgrades could draw an estimated $800 million of new funds into the two markets, according to HSBC.

Meanwhile, the Gulf’s macroeconomic fundamentals are strengthening. The International Monetary Fund expects the UAE economy to grow 3.6% this year, while Qatar's growth is forecast at 5.2% and Saudi Arabia's at 4.4% – each on track to beat the expected global average of 3% this year.

FUNDS UPDATE
According to Zawya Funds Monitor, UAE-focused equity funds were the best performers so far this year with first-half returns exceeding 40% for some funds.

Some Saudi Arabia-focused funds exceeded 20% in returns while average returns were 13% for the sector over the period. Qatar funds also did well with an average 12% in returns during the first half of the year.

Overall, the GCC region enjoyed robust performance during the first half of 2013.

In contrast, Egypt, along with its North African peers Morocco and Tunisia, struggled to keep performance flat over the period.

While upgrading the UAE and Qatar to emerging markets, MSCI downgraded Morocco's stock market to a frontier market and put the Egyptian Exchange under surveillance for a potential downgrade.

In the first quarter of the year, 19 new funds were launched, eight of them sharia-compliant. The main focus for these funds was Saudi Arabia, followed by the GCC and Mena regions. Eight of the newly launched funds were equity products, highlighting an increased appetite for risk among investors.

IPO FLUSHED WITH CASH
The region has long awaited a surge in capital inflows to help stimulate a sluggish initial public offering (IPO) market. Analysts were happy that Iraq opened its doors in January to local and foreign investors to sell 25% of its telecoms company Asiacell Communications and raise $1.3 billion.

Saudi Arabia made a productive start with four IPOs until the end of the first half of 2013. The IPO market in the GCC moved slower in the second quarter, but the Tunisian market made up for the lack of activity in other parts of the region, with six IPOs taking place during the first part of 2013.

Muscat witnessed only one entry to the public market, but has a relatively healthy pipeline of IPOs in the coming months.

The first half of the year ended with the IPO of Al Noor Hospitals Group, which listed on the London Stock Exchange – the second UAE-based company to float on the bourse – and raised $341 million from international investors.

With Europe showing some signs of recovery and the US economy gathering momentum by the day, the only dark cloud hovering on the horizon is the lacklustre Chinese economy.

A hard landing in China could upset global and regional investor sentiment and rein in what has been one of the strongest global equity rallies in more than a decade. 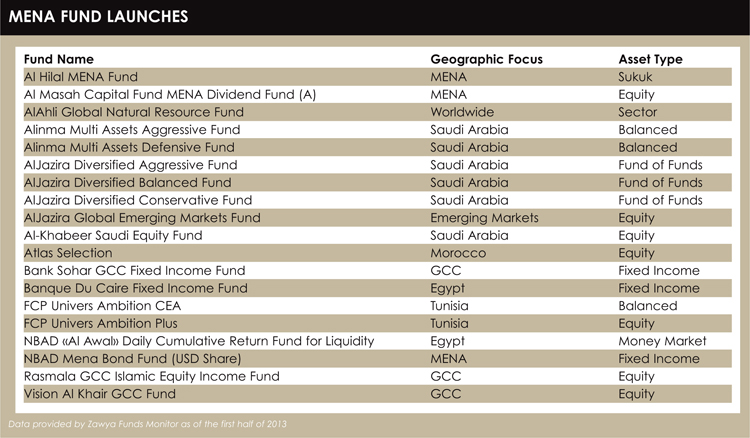 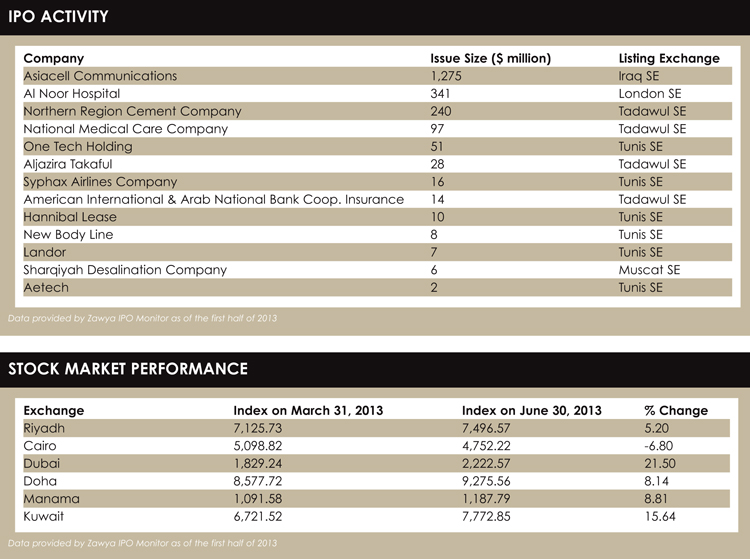