Gulf stock markets had a hard landing in the second quarter, with Dubai leading losses, while the MENA IPO market ended June on a quiet note.

The second quarter of the year was tough on Gulf Arab stock markets as the security crisis in Iraq and the start of Ramadan dampened activity.

The Dubai Financial Market index was hit hardest, dropping 11% in the three-month period ending in June.

The market was already vulnerable to profit-taking after surging 22% in the fourth quarter of last year and 32% in the first quarter of 2014 ahead of its upgrade by MSCI to emerging market status. The Dubai and Abu Dhabi markets were also shaken by heavy losses in the shares of Arabtec, triggered by management trouble at the construction firm.

The Kuwait Stock Exchange ended the second quarter down 8% to post its worst quarter in three years, as domestic political tension continued to weigh on the market. Other Middle East markets registered slower growth than the previous quarter.

FUNDS UPDATE
The UAE and Qatar were upgraded to emerging market status by MSCI at the end of May, with the inclusion of ten UAE companies and nine Qatari companies on the index. Other Gulf Arab countries were encouraged by the upgrade.

The Saudi Capital Market Authority announced on July 22 that it plans to open the Arab world’s biggest stock market to direct investment by foreign financial institutions in the first half of 2015.

After the announcement, an MSCI official told Reuters that the index compiler would consult with investors about adding Saudi Arabia to its broader stock indices and could make a decision to include it as an emerging market in June 2015.

In other developments in the second quarter, Oman witnessed the start of its first Islamic index, the MSM Shariah Index.

Egypt received approval to launch its first exchange-traded fund (ETF) and regulators issued rules to facilitate the creation of index and real estate funds and trading aimed at boosting market liquidity. Investors’ appetite for equities continued to grow, with the launch of six funds in the second quarter, four investing in equities. Of the six, four are sharia-compliant.

The second quarter ended on a quiet note in June, but the market is expected to pick up the pace again with several public offers in the pipeline. 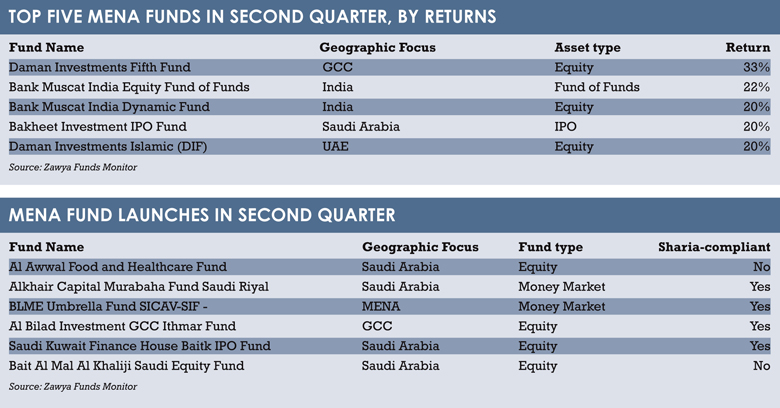 Compiled by the Zawya team of analysts