EXECUTIVE INTERVIEW: One of a kind 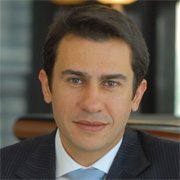 A new joint venture between a Qatari investment bank and a Dubai-based asset manager is promising to bring variety to the shariah investment market. Funds Global talks to chief executive Haissam Arabi about the plans for the new venture.

Tebyan Asset Management is a new investment firm that has been set up by Qatar First Investment Bank (QFIB), the first independent and shariah-compliant investment bank in Qatar, and Dubai-based fund manager Gulfmena Investments.  The project is currently awaiting authorisation from the Qatar Financial Centre Regulatory Authority (QFCRA), the regulatory arm of the Qatar Financial Centre, which is where it will be based.


Tebyan will focus on shariah-compliant investment. “The objective of the Tebyan venture is to be a total one-stop solution for Islamic investment,” says Haissam Arabi, Gulfmena chief executive, who will be running the new venture. The concept is the first of its kind, says Arabi, giving it an important first mover advantage in a market that is likely to become more popular over the forthcoming years.


Gulfmena and QFIB announced a strategic partnership in the last quarter of 2010 and the Tebyan venture will be the first product of this alliance. The partnership between QFIB and Gulfmena will be crucial to the venture’s success, says Arabi. Previous attempts to establish Islamic investment vehicles have failed because companies have tried to do too much on their own rather than seeking joint ventures.


With Islamic investment the involvement of shariah advisory boards can often be a significant constraint, particularly when it comes to distributing a fund. There is also the additional cost of appointing shariah advisors that can often be twice the expense of a traditional fund.


“You need an asset manager that can create the investment products, a banking partner that has a big balance sheet and the customer base to reach an Islamic audience,” says Arabi. “We felt that QFIB was the perfect partner in this regard. It is a relatively young bank but it has grown significantly in a short time while remaining very agile.”


The first investment product to be launched by Tebyan will be a shariah-compliant equities ‘Chime’ fund that will be distributed in China, India and the Middle East – areas where the domestic economy is still growing and where investment is increasing. The fund will primarily target high-net-worth individuals as well as institutional investors and with a minimum investment requirement of $100,000  (€70,000) – the idea being that there is little need to limit the number of investors by raising the entry level.

Islamic market
The Middle East may be experiencing some nervousness from investors due to the political unrest in the region but Arabi says these events can only be positive for Tebyan.


“Whichever way you look at it, it is positive for us,” says Arabi “The price for local assets is much cheaper currently and we do not think the political situation is going to get any worse. And for those investors that want to stay in an Islamic market but move away from the Middle East, we can provide the facility to do that.”


The first phase of the Tebyan project will focus on completing the service offering and developing strategies for the Middle East. The second phase, however, will look to appeal to Islamic investors in other regions, while the third phase will look at global asset allocation opportunities.


“The aim is to be physically present in every available market,” says Arabi.


Tebyan intends to come up with a series of products to satisfy a variety of demands within the shariah asset management market, according to Emad Mansour, chief executive of QFIB. It is a market that Mansour believes has been poorly served thus far.


“For example, private equity as an asset class is not for everyone not least because of the high entry level [around $1m]. And you won’t get any decent returns from real estate unless you invest directly. That just leaves the equities asset class for those investors who don’t have very deep pockets.”


There is also a lack of access to international markets when it comes to shariah funds, says Mansour.


“The weakness of the shariah funds market is the lack of variety. Investors have to travel far to get exposure to different markets. So for a Qatari-based investor for instance, looking to find a shariah-compliant fund focused on blue chip equities in the European Union for example, will be wasting his time as the product simply does not exists. The shariah-compliant asset management market has not yet penetrated beyond Mena equities, which presents a market opportunity for us.”

Stable returns
Some uncertainty about the future of Islamic banking in Qatar was raised earlier this year when the Qatar Central Bank issued new rules that prohibited mainstream banks from engaging in any Islamic banking activity, limiting the market to pure play Islamic banks only. The central bank’s announcement was certainly a shock to HSBC which had its Islamic banking operation opened by the QCB governor less than a year ago and will now have to close it down by the year-end.


Mansour, however, is confident that no regulatory announcements on Islamic investment will affect the launch of Tebyan. Instead, he is focusing on the possible appeal of an emerging market-based, shariah-compliant investment fund to an international audience that are underwhelmed by the returns and the risk profiles of conventional Western funds.


This decade will be known as the decade of emerging markets, says Mansour, who feels there is still a lot of growth to be captured in those markets. In Europe, growth is stifled because it is mainly driven by exports and technology, both of which are losing steam. But the emerging markets are driven mainly by demographic factors and there is still massive demand for services and products as more of their populations become consumers.


And when you combine the appeal of shariah-compliant investment, it is understandable perhaps why Tebyan intends to provide only shariah-compliant asset management products and services. “Islamic investment is essentially social and responsible investment (SRI) so it appeals to more than just the Muslim world,” says Arabi.


There is also the benefit of decreased volatility and the promise of more stable returns from shariah- compliant investment, says Arabi.


“It has a lower gearing and a higher survival rate so investors will not suffer as much in a market downturn.” And while there has been a general slowdown in the investment world as a result of the financial crisis, the Islamic investment market has fared better than most.