US EQUITIES: The best assets in the universe?

Thatâs an American fund houseâs view of US equities. Nick Fitzpatrick asks if the same sentiment is to be found in Dubai. Since the beginning of the year, US equities have come back into the spotlight after positive economic data, such as employment numbers, and rising yields caught fund managers’ attention. So could it be that the first country to enter the financial crisis could also be the first to leave it? ClearBridge Advisors, part of US-listed asset manager Legg Mason, reckoned in January that US equities were the “best asset class in the world”. But the mood at Emirates NBD Asset Management (ENBDAM) is not so positive, where Sean Daykin, head of investment funds and based in Dubai, warns that the profit margins of US firms may not be sustainable. On top of this, he disagrees with analysts’ earnings forecasts. The case for US equities at ClearBridge was made by Hersh Cohen, chief investment officer, who recently said that cheap valuations and rising yields made US equities very attractive. Cohen oversees $48 billion (€36 billion) of assets for ClearBridge. He said American stocks, in general, and high-quality blue chip companies, in particular, were extremely undervalued given their balance sheet strength and increasing tendency to pay and raise dividends. “Prices and yields make US equities the best asset class in the world right now. American stocks have discounted a very negative scenario and high-quality stocks have discounted the worst possible scenario. We can’t find any areas of the market that are overpriced,” he said. Cohen added that US companies were flush with cash and were being aggressive with dividends and share buy backs. Even some great cyclical companies, he said, were trading at levels that looked very attractive. Cohen predicted that many US stocks would perform well in the early part of 2012, though he cautioned the longer-term picture would become murkier as government spending cuts began to bite. “We think the surprises over the next six months will be on the upside. But after the second half of the year, when austerity measures become more real, the situation will become increasingly uncertain.” Between 30 November 2011 and 31 January 2012, the Dow Jones Industrial Average returned 5.67% (see table). Optimism
Last year, the US turned out to be one of the best-performing markets by the time the year ended, outperforming the MSCI World (ex-US) and even emerging markets. A turnaround in sentiment in the fourth quarter led US equity markets to rally sharply and the S&P 500 finished the year in positive territory. News flow that has led to optimism for the US market started in December with data that showed unemployment claims dropped to their lowest level since 2008 and consumer confidence had reached a six-month high. Even the beleaguered US housing market showed signs of rebound with a large jump recorded in new housing starts. Yet ENBDAM, owned by Dubai-listed Emirates NBD banking group, has taken an underweight position in the asset class, says Daykin, and is overweight in other parts of the world. Could it be that the appetite for US equities diminishes with every air mile? Perhaps not, as Daykin, a former US equities manager at the Abu Dhabi Investment Authority, notes ENBDAM’s stance is “fairly unconsensus”. The firm has exposure to US shares through its Balanced Managed Fund. “Jobless data and levels of economic confidence mean US equities tend to be the favoured asset class at the moment,” he says. Determining factors
Daykin agrees that the market is not expensive, with various sources stating price-earnings ratios of between 12 and 13. 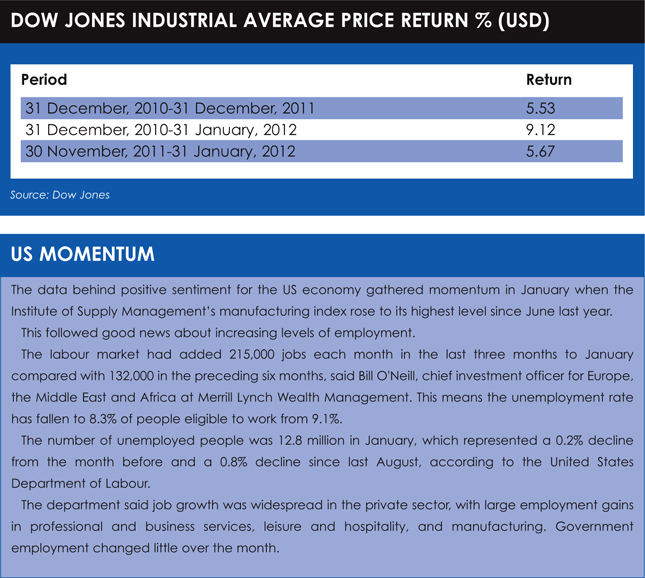 But “it’s a bit of a crowded trade and we are also concerned that profit margins are not sustainable”. He adds: “Profit margins are at their highest level for five to six years but this has come about after firms sacked a lot of people in the downturn.  Eventually, profit margins will have to mean-revert and they will come down as they do.” He also says bottom-up analysts had been expecting 10% earnings growth over the next year, but ENBDAM had expected these forecasts to be revised downwards. And then there is the ongoing question of the euro. “We think the weak euro will have an impact on the US. A lot of S&P 500 companies have exposure to the eurozone and the weaker euro will make their goods expensive,” says Daykin. European companies could become more competitive exporters compared to the US, Daykin says, adding that ENBDAM’s preference is to go for the more “beaten up markets” in Europe and Japan. “There are good export businesses in Germany, France and Spain,” he adds. Earnings are also considered determining factors for US equities by other fund firms including JP Morgan Asset Management and Schroders. For example, Robert Farago, head of asset allocation at Schroders Private Banking in London, is cautious about earnings expectations and says earnings are a key threat to equities. “With consensus expecting growth of 23% over the next two years at a time when margins are at historic highs, we see scope for disappointment.” He adds: “However, companies able to sustain or grow their earnings, together with those able to deliver an attractive dividend return, offer investors a more compelling investment than either cash or government bonds.” IIlario Di Bon, head of global equities at Alliance Trust Investments, says the recent improvement in economic momentum could gain further ground. He says that for it to be sustainable in the medium-term it is imperative that the US addresses “multiple structural imbalances associated to excessive debt levels of the private, financial and public sectors”. He notes: “2012 being a presidential election year might indicate the future direction of the country’s fiscal and financial discipline.”   ©2012 funds global