FUND LAUNCHES: Home is where the heart is

Saudi Arabia was the most popular fund domicile for Middle Eastern and North African (Mena) asset managers that launched funds over the past year.

According to Lipper, a data provider, local asset managers have launched 37 new funds since the start of 2011 and, of these, 30 were domiciled in Saudi Arabia.

Three funds were domiciled in Bahrain, two in the United Arab Emirates, one in Kuwait and one in Oman.

An increasingly better regulatory environment could entice more fund managers to domicile funds in the Mena region in future, including ING Investment Management, which is from the Netherlands.

ING operates the ING Invest Middle East & North Africa fund, but because it targets international investors who, for regulatory reasons, tend to have specific requirements surrounding issues such as custody, it is a Luxembourg-domiciled fund that complies with Europe’s Ucits directive. As such, it is domiciled in Europe and will be considered a “foreign fund” in Saudi Arabia. These funds cannot invest directly in the market.

But Fadi al Said, head of strategy at the firm, says that with regulations improving, ING might well domicile a fund in Saudi Arabia in

Saudi Arabia is becoming more interesting to investors. Al Said expects an increased flow of initial public offerings and the long-awaited opening of the Saudi market to foreign investors.

Saudi Arabia is not only the biggest economy in the region but it also has the most liquid stock market.

The size of the market in terms of investors – both retail and institutional – is larger than in other countries around it.

In terms of asset classes, equities have dominated new launches. Of the 37 new funds, 22 fall into Lipper’s equity classification, seven into real estate, three into money market, two each into bond and mixed assets, as well as one commodity product.

Active portfolios
United Arab Emirates-based Royal Capital launched one of the two mixed assets funds. Investing predominantly in the Mena region, the Royal Capital Mena Multi-Market Strategy fund was launched with 50% of its portfolio invested in bonds and 50% in equities. Though, according to the fund’s mandate, the team can also invest in other financial instruments and markets in central Asia and Africa.

“A year after its launch, the Mena Multi-Market Strategy fund is back in positive territory in what continues to be one of the most challenging environments for Mena markets,” says Royal Capital.

On the bond side, the team added high-yielding short-dated securities.

“We remain cautious, though we may continue to gradually increase our risk were the momentum in equity markets to remain,” says the asset manager.

The majority of funds launched in recent months invest in the countries of the Gulf Cooperation Council (GCC) – Bahrain, Kuwait, Oman, Qatar, Saudi Arabia and the United Arab Emirates.

“But they are torn between the lower demand impact of a potential double-dip in the US, European recession and lower Chinese growth and supply constraints and potential political disruptions.”

There were also three money market funds launched since the start of the new year, one of them being the Saib Sukuk fund by Saib BNP Paribas Asset Management.

This fund is sharia-compliant and uses a selected mix of active and passive investment with the aim of generating both income and capital appreciation over the medium to long-term. It invests in a diversified portfolio of GCC-based sukuk issues, sukuk funds, murabaha placements and other short-term instruments.

Much of the fund launch activity in the Mena region has focused local markets, but a few funds in the batch of launches suggested that some asset managers were starting to broaden their universe. 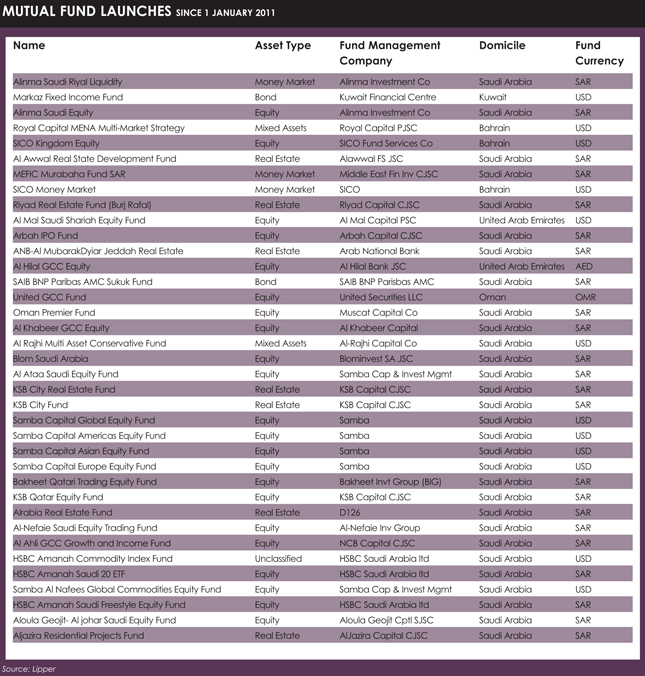