IN NUMBERS: Trade with Asia 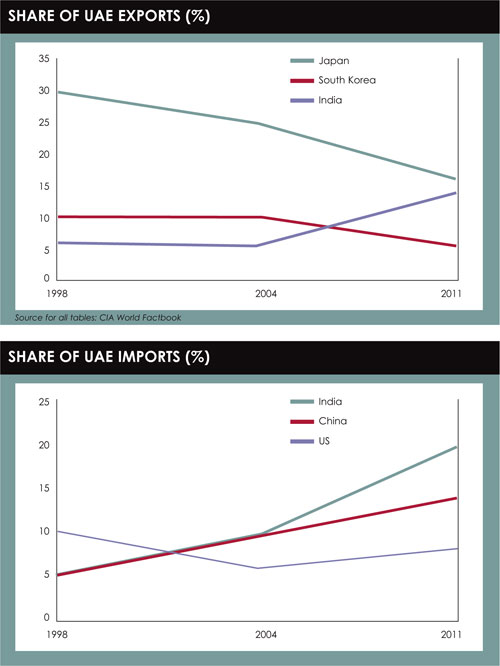 The Asian investment theme has captivated investors in the Mena region, with sovereign wealth funds playing a leading role. When the Kuwait Investment Authority opened an office in Beijing in 2011, managing director Bader Al-Sa’ad said the opening “reflects the reality of the new world order”.

He added: “Wealth creation and accumulation has shifted from the West to the East; from the North to the South.”

He said that the authority had increased its investment in mainland China from nothing to $5.6 billion in five years.

Other sovereign wealth funds in the Gulf have large allocations to Asia. The Abu Dhabi Investment Authority (ADIA) has a benchmark to invest between 10% and 20% of its portfolio in developed Asia and between 15% and 25% in emerging markets, some of which are Asian. It is reasonable to assume the fund has about a fifth of its money in Asia at any time.
­­­

These investment flows are matched by underlying trends in the real economy that are pushing the Mena region closer to Asia. Two country cases, the UAE and Saudi Arabia, offer proof of the growing trade link.

THE UAE
The UAE has always had strong trading links with Asia. Merchants from the Indian subcontinent were essential in developing ports such as Dubai into the vibrant trading hubs they are today.

It is no surprise, then, that Asian countries are the biggest recipients of the UAE’s exports, which are principally crude oil, natural gas, dried fish, dates and re-exports. For more than a decade, Japan has been the top recipient, according to figures from the CIA World Factbook. However, its share has declined since 1998, as has the share of formerly second-placed South Korea.

In contrast, India’s share of UAE exports has more than doubled since 2004 to 14%. This is likely to reflect rapid GDP growth in India, which peaked at nearly 10% during the 2000s.

India’s expanding economy also accounts for the rising significance of Indian imports to the UAE. In 1998, India was not in the top six importers to the UAE, but in 2011 it accounted for nearly a fifth of imports, which are principally machinery, transport equipment, chemicals and food.

The rise of India – and of China, which was the second-biggest importer in 2011 – has come at the expense of the West. The United States, Germany, the UK and France have all seen their share of imports to the UAE decline since 1998. 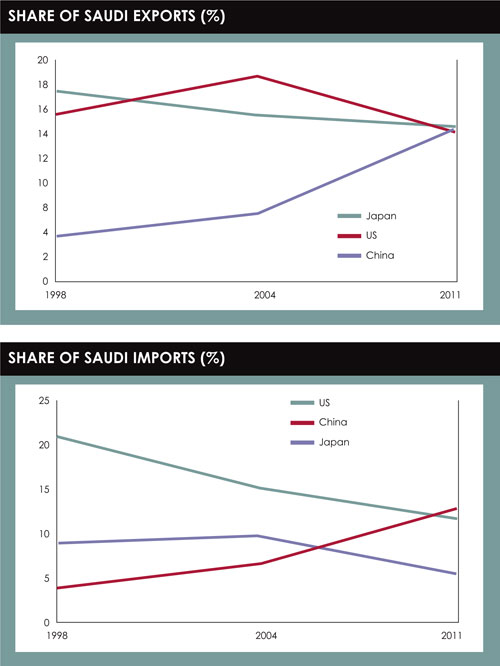 SAUDI ARABIA
The main exports of Saudi Arabia, the largest economy in the Gulf, are oil and oil-derived products. Asian countries are crucial customers. The top six recipients of Saudi exports are all Asian nations except for the United States, whose share has declined since 2004. Japan is the biggest recipient of Saudi exports, but, like the US, its share is reducing.


The greatest change has been the rise of China, whose share of Saudi exports was only slightly less than Japan’s in 2011, and more than twice what it was in 2004. In 1998, China was not in the top six recipients, which means it then received less than 4% of Saudi exports.

China has also become the top importer into Saudi Arabia, overtaking the US, which used to be the largest supplier of goods into the country by far. Saudi Arabia’s principle imports are machinery and equipment, foodstuffs, chemicals, motor vehicles and textiles. In 1998, the US supplied more than a fifth of this, more than twice what the UK and Japan brought in. The US is now second to China, which in 1998 was not in the top six importers.