The historic centre of the Arab world is undergoing a fraught transition to democracy. Is Egypt a compelling investment opportunity or âa basket caseâ? George Mitton reports.

It was a moment rich in historical significance when Egyptian gold – the same substance to decorate the death masks of the pharaohs – was extracted in 2009 from Egypt’s first modern goldmine.

The Sukari project in the country’s eastern desert was a joint venture between the Egyptian government and Centamin, a London-listed mining company whose main asset was the exploitation lease for the site.

“The first gold pour from Sukari marks the beginning of our production from the largest goldmine to come on-stream this year,” said Josef El-Raghy, company chief executive, at the time.

But on January 25, 2011, after only one full year of on-stream operations, the political situation in Egypt changed. The country began a revolution that would overthrow Hosni Mubarak after more than 30 years in power and lead to elections that placed the Muslim Brotherhood in charge.

There was soon tension between Centamin and the country’s new leaders. In 2012, the government cancelled a fuel subsidy Centamin had received since December 2009 and refused to supply diesel to the Sukari mine until the company met what Centamin called an “illegal” demand for back-payments worth $60 million. Then, Centamin found its efforts to export gold blocked by what it called “an unforeseen and arbitrary request” for prior approval by the Minister of Finance.

With its supply of diesel halted and a shortage of working capital because of the export ban, Centamin announced on December 13 that it would suspend operations at the Sukari
mine, putting hundreds of jobs at risk.

“That got people’s attention,” recalls Khaled Abdel Majeed, founder of investment firm Mena Capital, a shareholder in the company.

But as well as putting pressure on Cairo, the suspension dismayed investors. Centamin’s stock price almost halved in a day.

The experience of Centamin reflects the risks companies face in countries that undergo political changes. Few countries have as difficult a transition as Egypt. The country must rapidly adapt to democracy after nearly 60 years of one-party rule. Its ruling party, the Muslim Brotherhood, now a broad-based political movement, was for years a secret organisation.

POLITICAL DIFFERENCES
“The Muslim Brotherhood has been used to doing everything close to their chests so they don’t get thrown in jail,” says Majeed. “They’re not used to being open, transparent and consultative.”

The country is striven with political differences. The liberals, who were the driving force behind the revolution, are unhappy with the conservative policies of the Brotherhood and resent the wide-ranging powers president Mohamed Morsi has assumed.

Amid this division, there have been attacks on people and institutions associated with the Mubarak regime that Majeed describes as a “witch-hunt”.

And yet, the revolution has also brought new life. Democracy brings accountability, freedom and the hope of a brighter future. What chance is there for precious growth in Egypt?

HOPE AFTER FEAR
Excluding Centamin, the stock performance of companies operating in Egypt in 2012 was fairly good. Egypt was the second-best performing emerging market index after Turkey, according to MSCI (see box). Its gain of 47% did not, however, recover what was lost the previous year when the index fell 49%.

“For many people, 2011 was a fearful year,” recalls Omar Radwan, head of asset management at Cairo-based HC Securities & Investment. “Nobody knew which way the country was going.”

That year, Egyptian equities sold off and there were outflows from mutual funds. Assets in Egypt-domiciled funds fell by about $1 billion during the year to $8.5 billion, according to data service Zawya Funds MonitorBut asset managers have recovered in hand with the economy. By the end of 2012, Egyptian assets under management had risen to just under $10 billion.

There have been some successes. Amid the trauma of 2011, Radwan’s company decided to launch several funds. One of them, Misr Al Mostakbal, The Future of Egypt, was the best-performing Egyptian equity fund in 2012, according to figures from the Egyptian Investment Management Association.

Radwan is cautiously optimistic for the future. He says the stock market is now less jumpy because investors have “priced in” political instability in the country.

A grisly example supports the point. At the end of January, some 40 people died when civil unrest broke out in Port Said after locals were sentenced to death for their involvement in a football stadium disaster the year before. The Egyptian people were shocked by the tragedy, but the stock index did not move significantly, dropping a few points and recovering within the month.

Egypt’s greatest hope is that its new, democratically elected leaders will be accountable. This means they must try to tackle what may be Egypt’s biggest challenge of all: youth unemployment. 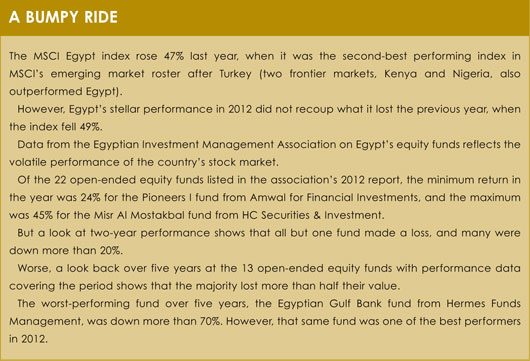 A key strategy could be to aid the development of small and medium-sized businesses in towns and villages. Central governance was a hallmark of past Egyptian regimes. As a result, wealth and power gravitated to Cairo. Mass internal migration turned Cairo into a city of more than nine million people, the largest in the Arab world.

“This has created a lack of small businesses and business services everywhere except Cairo,” says Radwan.

Building up small and medium-sized businesses in every village could create jobs quickly, he says. This is the development path that helped India demonstrate rapid economic growth in recent years.

No one is saying it will be a smooth ride. Radwan says there will be “teething problems” as the country’s large population, of diverse political beliefs, tries to manage the transition to democracy.

And some companies do not want to join the ride. The Sawiris family, who own the Orascom conglomerate, seem to want to reduce their exposure to the country. Orascom Construction Industries listed on the Amsterdam stock exchange at the end of January and is involved in a deal, backed by US investors including Bill Gates, that could result in the removal of its stocks from the Cairo stock market. The construction giant accounts for some 15% of Egyptian market capitalisation.

Meanwhile, France Telecom agreed a preliminary deal in February to buy out the share of Egyptian operator Mobinil owned by Orascom Telecom Media & Technology. If the public tender succeeds, the operator will be delisted.

Perhaps the family wants to avoid repeating history. Onsi Sawiris, the patriarch of the family, found his business empire frustrated under the government of Gamal Abdel Nasser in the 1950s and 1960s.

TIME TO INVEST?
Is now a good time to invest in Egypt? Some say the country is a good bet for the more adventurous and risk-tolerant investor.

“If you want high risk, high returns, look to Egypt. The equation is there,” says Walid Hayeck, managing director, asset management at The National Investor, based in Abu Dhabi.


On the other side, some say instability has only just begun. It could take years for Egypt’s political system to adapt to democracy, they say, and during that time decision-making will be hamstrung, tensions between conservatives and liberals fraught, and more companies like the Orascom group will move their listings to other countries. One consultant in the region who professes this view describes Egypt as “a basket case”.

As the former chief investment officer at EFG Hermes, Egypt’s biggest investment bank, he knows the country well. He is not currently invested in the Egyptian stock market.

“The thing I’m looking for is value. The market is trading at nine to ten times earnings. Given the risks, I’m not being paid enough to go in.”

Majeed says that might change. If the value of the market drops to between seven and eight times earnings, he would invest. But not now.

Perhaps the best time to have invested in the Egyptian stock market was at the start of 2012, after a year in which the index dropped by nearly half. Investing then, at the bottom of the market, would have been profitable.

Now, there is less potential for growth, though certain stocks could perform well. Just take Centamin, the London-listed gold miner whose stock price took a tumble after the government cut off its fuel supply. Though the stock price has since risen a little, it is still a third of what it was in late 2010, before the Egyptian revolution – plenty of potential for growth for those investors willing to take on some political risk.