Oil is cheap, but for how long? And can the Gulf economies take the pain? George Mitton reports.

A review of oil forecasts through the ages shows one thing: no one is much good at predicting the oil price. After the collapse in the value of Brent crude at the end of 2014, investment bank Goldman Sachs forecast an average price of $50 a barrel this year – a sobering thought for governments in the oil-exporting Gulf countries. But will it come true? Remember, this is the same firm that said in 2008 that oil prices could rise to $200, when in fact they collapsed amid the financial crisis.

It is easier to explain things in retrospect. It is common knowledge that shale technology has opened up new sources of previously inaccessible oil, leading to an oversupply. OPEC, the Organization of the Petroleum Exporting Countries, which represents the world’s main suppliers, has refused to cut production, hoping that low prices will bankrupt the shale producers and quash development of new wells. When the price does rise, OPEC hopes its market share will be intact.

But what does the low oil price mean for investors and asset managers? Will regional equity markets suffer throughout the year?

BIG PLAYERS
Most obviously affected are the biggest exporters, such as Saudi Arabia. Petroleum accounted for 85% of Saudi export revenues in 2013, according to OPEC. The dramatic fall in prices almost halves the country’s income.

Saudi Arabia has decided to swallow the costs. The country is planning to run a budget deficit this year and will pay for the overspend with its considerable foreign exchange reserves (the Saudi Arabian Monetary Agency had $736 billion under management at the end of November). The budget shows the government will support growth despite a low oil price, says a report by Jadwa Investment, an asset manager based in Riyadh.

“The huge stock of assets that the government can call on gives Saudi Arabia an advantage over most other countries in alleviating the impact of lower oil prices,” says Fahad Al-Turki, head of research at Jadwa. “That means it can push ahead with strategic projects, such as key infrastructure development including transport, housing, oil, power and water, and support the private sector where necessary.”

Kuwait is also heavily dependent on oil, yet its well-funded sovereign wealth fund, the Kuwait Investment Authority, gives it the luxury of a financial cushion that could tide it over during several years of low oil prices if necessary. The UAE should also be OK. It can rely on the immense resources of the Abu Dhabi Investment Authority, one of the wealthiest sovereign funds in the world.

In fact, the worst affected Gulf countries are likely to be the ones that pump less oil – Oman and Bahrain. These two nations are less wealthy than the likes of Saudi Arabia yet still rely to a large extent on oil revenues. 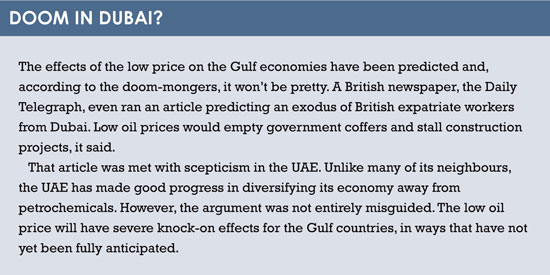 How bad will it be? Oman’s budget suggests the country will run a deficit equivalent to 8% of GDP this year, though it could be more if oil prices are lower on average than Ministry of Finance predictions. The ministry says it will explore a range of options to meet the shortfall. including grants from international donors, domestic and foreign borrowing, and dipping into state reserve funds (see more on Oman on page 30).

Bahrain may also resort to borrowing. The country is generally understood to have the highest break-even price – the threshold oil price it needs to balance its budget – of all the Gulf countries. In April 2014, Deutsche Bank estimated Bahrain’s break-even price at $134 a barrel. At the time of writing, a barrel of Brent crude costs less than half that.

Bond investors have already identified the relative strength and weakness of Bahrain and Oman compared with the other Gulf states. Government bond yields in the Gulf countries have diverged, an unusual occurrence given that, in the past, many investors treated the nations of the Gulf Cooperation Council as a bloc. The message is clear: investors fear Oman and Bahrain lack the firepower to protect their economies amid a sustained low oil price.

The GCC countries are not the only Middle East states to suffer either. Iran, which gets about 40% of state revenues from oil exports, has had to cut spending. The country’s budget, submitted to parliament for approval on December 8, was described as “tight” by Turquoise Partners, an Iranian investment firm. Iran aims to control expenditure, particularly in infrastructure.

“Assuming that the [Iranian] rial does not depreciate further, this is not good news for listed industries, such as steel plants, cement, construction and basic metals, which are affected by government expenditures,” says the report.

NOT ALL BAD
So much for the bad news – what are the positive outcomes of a low oil price? A clear benefit is for the oil-importing countries. In the MENA region, Egypt is the most significant of these. The low oil price allows the government to spend less on fuel subsidies, leading to a windfall for public finances. The gain may not be as dramatic as some would expect, because Egypt already gets its oil at preferential rates due to special agreements with the Gulf countries which subsidise its energy costs, says Hedi Ben Mlouka, frontier fund manager at investment firm Duet. Nevertheless, the price fall is a boon for the government of President Abdel Fattah el-Sisi, and will help pay for some of the country’s infrastructure projects.

The low oil price will benefit other North African countries too, such as Tunisia and Morocco. As a result, Ben Mlouka advocates selling assets in the weak Gulf countries of Oman and Bahrain and buying North African assets.

Because his is a frontier market fund, he has the flexibility to invest outside the MENA region. He says Pakistan, which has ongoing grid failures, will benefit from lower energy costs. “It doesn’t resolve structural issues but will close the deficit,” he says.

There are benefits further afield too. Low oil prices are good for much of the developed world. “We should consider this to be a material tax cut for both the US and European economies,” says Dominic Rossi, global chief investment officer for equities at Fidelity Worldwide Investment. It may be wise to move assets from the Gulf region to Europe or the US as a result of the low oil price.

LOOKING AHEAD
Let’s remember low oil prices probably won’t be here forever. OPEC, which of all the players in the market has the most power to dictate prices, does not want a low oil price in the long term – this would diminish the value of its resources. Instead, the cartel wants to put a squeeze on the US shale industry, either by pushing the new market entrants out of business or forcing them to cut back on exploration and development of new wells. Doing so will reduce the oversupply caused by shale oil, which in turn will push up prices.

OPEC has basic economics on its side. Its members extract oil from conventional wells at comparatively low cost. In contrast, shale oil producers spend more per barrel getting oil out of the ground, and their wells deplete more quickly, meaning they must constantly develop new wells to maintain supply. This makes shale the higher marginal cost producers, and in typical economics that puts the responsibility for supply management on them. When oil prices go up, they are the ones who increase production; when prices go down, they are the first to cut back.

Although some analysts, such as Goldman Sachs, are forecasting low oil prices for one or two years, some fund managers believe it will not take as long for the shale market to correct itself.

“My guess is six months,” says Saleem Khokhar, head of equities at National Bank of Abu Dhabi (NBAD) Asset Management. “When you look at shale producers, they probably have enough cashflow to go through three to six months. Their forecasts were probably based on an oil price of $80. At some point, cashflow problems will force them to scale back operations and some will have to liquidate.”

Khokhar concedes it could take longer than six months if the shale producers decide to ride out the low oil price without cutting back on exploration. Like a game of chicken, each side can potentially hold on, at great personal cost, to the point where both sides are hurt. However, given that OPEC’s members include the aforementioned cash-rich nations of Saudi Arabia and Kuwait, it is almost certain that OPEC can afford to hold on for longer.

Once the shale oil producers have been subdued, the oil price ought to rise again, relieving the pain of fiscal deficits in the Gulf. Most analysts doubt oil will return to its glory days of $100 a barrel, though. Khokhar expects a price of $70-$80. This means Gulf governments will be less flush with cash than in recent years, but this price point is “comfortable for most of the GCC”, he says.

“People take these things to extremes,” says Khokhar, commenting on some of the wilder claims in the media that postulate a “new normal” for oil in which prices stay around $50 indefinitely. “You are extrapolating current conditions in perpetuity instead of treating it as a one- to two-year thing, after which supply and demand correct into equilibrium.”

INVESTMENT TRENDS
What can investors do, apart from allocate away from the weaker Gulf states to North Africa or the developed world? Another option is to explore different asset classes. Few equity managers predicted the extent of the drop in oil; however, London-based hedge fund firm Man Group’s trend-following strategy made a profit.

The fund is quantitative, which means it responds to price information only, without the influence of active managers. When oil prices started to fall, the fund automatically took short positions on oil futures, which yielded positive returns. Last year, the fund was up 34%. Shorting oil was only a minor contributor to this gain, the largest contributor being a long position on US treasuries. Nevertheless, the experience shows how an alternative fund can make gains in a market where many equity funds have faltered.

Suk Inthirarajah, director, Man Investments Middle East, says products such as the trend-following strategy can be useful to Middle East investors because they help to diversify portfolios, providing protection against what have been very volatile regional stock markets.

“Panic selling has been indiscriminate,” he says, talking of the recent volatility that saw some exchanges fall 25% in the final quarter of 2014. “You have stocks that have little relation to the oil price that are getting hammered alongside oil-related stocks. You need something that will provide balance.”

Investors can respond to the low oil price by investing in alternatives, in assets that aren’t correlated to the oil price, such as real estate, or shifting money into the economies of oil-importing countries. In essence, though, the strategy must be similar to that of the OPEC producers: ride it out, try to limit the damage, and hope oil prices will rise and the good times will return.