Retail fund flows have been slow due to regulatory uncertainty and preferences for direct investment in markets. But there is still potential for growth, finds George Mitton.

Investments in mutual funds account for a small portion of assets held in the Mena region, with many people choosing to invest directly in stocks and bonds.

In the UAE, this tendency has not been helped by regulatory uncertainty that has led distributors, namely local banks, to step back from distribution while they await clear rules.

Other trends have worked against the aims of asset managers targeting the Mena retail market: the move towards tangible assets such as property, and a growing interest in private equity investment, which have each drawn investors’ attention away from managed funds.

For now, institutional business is the mainstay for many asset managers in the region. But market changes could promise a brighter future for retail investment.

One of the challenges of running a retail business is that investment habits are subject to change.

“Generally the retail investor in the UAE and wider Mena region is very influenced by trends and returns, so as markets move, retail investors tend to seek to participate in a particular market or asset class,” says David Marshall, senior executive officer, Emirates NBD Asset Management.

ISLAMIC BONDS
This tendency means asset managers may not be able to bank on reliable inflows from local investors, though the power of investment trends can create opportunities.

“We have seen a significant bias towards our fixed income fund range and mandates this year and a pick up in appetite for sukuk [Islamic bonds],” says Marshall. “The investment case here is a compelling one, with continued pricing anomalies remaining in a market that has relatively limited supply.”

Marshall adds that one consequence of the financial crisis is that retail investors are more willing to enlist the help of professional managers, whether they are life insurance, platform or takaful [Islamic insurance] providers. Asset managers can benefit by selling their services to these providers.

However, in the UAE at least, regulation has clouded the retail market. The draft regulation of the UAE’s rules on investment funds came out last year and created an atmosphere of uncertainty that is only now dispersing as the now-published rules are interpreted.

The laws say the UAE regulator, the Securities and Commodities Authority (SCA), must give approval to all funds distributed in the UAE, including foreign funds. After the draft was published, many distributors of funds, such as local banks, paused their efforts to develop and promote products while they waited for the rules to become clear.

“As the market has evolved, clients have looked for new products, [but] the banks haven’t felt comfortable taking new products to market,” says William Wells, director, Schroders Middle East. “That’s had an impact on direct distribution of mutual funds through the banking channel.”

Wells is confident, though, that now the laws are passed, the industry will work together to find an interpretation of the rules that suits them and the regulators.

“The most positive thing that has come from this uncertainty is the formation of the UAE Financial Services Association, which Schroders has joined.

“We’re starting to see the association sitting down with the SCA and discussing the important points. I think we’ll see more of a Q&A that helps outline what the meaning of the regulations is, so there’s clarity to all participants in the market to help avoid the unintended impact. A lot of questions are still to be answered, but the good news is a lot of those questions are in the process of being answered.”

But the uncertain regulatory environment is only part of the explanation for low fund flows. Many investors in the Mena region favour direct investment in equities or corporate bonds. Then there are the long-term effects of the financial crisis, which diminished confidence in public markets, and encouraged many wealthy individuals to put money into property or private equity in the belief they would have more control over their assets.

WARINESS
Lacklustre flows into regional stock markets underline investors’ wariness. Data in a report from Deutsche Bank shows combined equity flows into the Saudi Arabian, UAE, Kuwait and Qatar exchanges were negative in five out of the first nine months of 2012. Aggregate year-to-date flows for the nine months were down 82% compared with the same period in 2011. The result was principally caused by large outflows from the Qatari market.

However, there are a number of developments that could bring dynamism to the retail market in the Mena region.

The Dubai Department of Economic Development has taken advice from the World Bank on establishing a private pension scheme for expatriates, which would most likely build on the existing system of mandatory end-of-service benefits, which companies throughout the Middle East pay expat employees when they leave (see pages 22-24). Some companies have already developed employee savings schemes in anticipation of a new law or to reward valued employees.

Another factor that could breathe life into retail asset management in the region is the upgrading of the UAE and Qatar from frontier to emerging market status in the MSCI indices. MSCI decided in June not to reclassify the states, which will have to wait until June 2013 to be reviewed again.

OWNERSHIP
MSCI has said the UAE meets the requirements for promotion except on some issues regarding custody and clearing and settlement, which require local authorities to implement new systems. For Qatar, low foreign ownership limits on stocks are an issue the Qataris are beginning to address. Deutsche Bank, in a report published in October, noted that two companies had had their foreign ownership limits increased, according to the registry of the Qatar Exchange: Qatar Cement (from 14.2% to 19.2%) and Industries Qatar (from 7.5% to 12.25%). 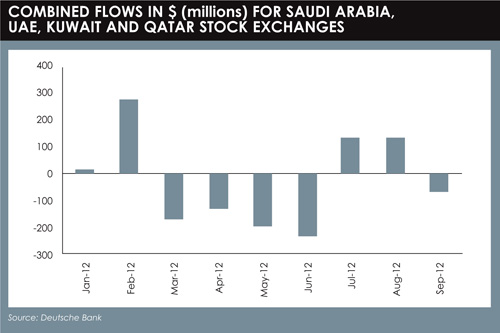 Then there is the potential opening up of the Saudi equity market. Rumours circulated throughout 2012 that the authorities were planning to grant large institutional investors direct access to the Saudi stock market, the Tadawul. It was expected that the authorities would follow a similar model to the Chinese and grant qualified foreign institutional investor (QFII) licences to selected institutions, such as large pension funds. This move, it is said, would presage a broader opening up of the economy that would bring the country, by far the largest economy in the Gulf, firmly within the sights of international fund managers. The country has yet to open its doors, but observers say it is only a matter of time.

A final development, which may depend on the preceding changes, would be for international investors to recognise the opportunities of Mena companies and begin en masse to allocate capital to the region. This would invigorate the local markets and create a more compelling prospect for fund managers who target the retail space.

However, it is likely that fund flows in the retail market in the Mena region will always be difficult to quantify. Wealthy individuals from the area are accustomed to making investments via private banks in Switzerland or, increasingly, Singapore, while investments made through insurance policies are likely to be hidden from local providers. The true size of the Mena retail market may in a sense be bigger than its current small size, but it may still grow.