FUNDFORUM ROUND-UP: Gathering after the summer 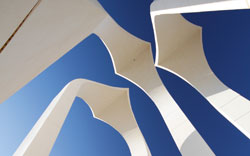 FundForum Middle East returned to the Ritz-Carlton in the Dubai International Financial Centre (DIFC) this September. It was its second year in a row in this venue, having been held in Doha before that. For many delegates based in the region, the conference was the first chance to see contacts and colleagues after the summer holidays, a time when many escape the heat of the Gulf by visiting the US and Europe.

As had happened last year, the conference consisted of two days of talks and networking sessions, preceded by what the organisers call the global asset allocation summit, which is on Sunday.

During a panel discussion at the summit, Omar Bassal, head of asset management at the Saudi Arabian family office MASIC, gave his views on equities, and explained why, in Saudi Arabia, he prefers unlisted firms over public ones.

“Our family office doesn’t want companies to list because we make more money off them as private entities,” he said.

Bassal had a personal perspective on the Saudi authorities’ habit of implementing change suddenly, as seen most recently in their surprise announcement that the Saudi stock exchange would open to direct foreign investment next year. Bassal recalls going on holiday to the US when the Saudis still had the Thursday-Friday weekend. When he arrived back, the weekend had changed to Friday-Saturday.

“In Saudi Arabia, it can look like nothing is changing then everything will change quickly. They do things unexpectedly.”

The discussion was followed by a session on smart beta, a theme that came up several times during the conference. Altaf Kassam, head of applied index research at index compiler MSCI, was at pains to emphasise that smart beta is nothing new. The notion of capturing “factors” such as low-volatility stocks, has been practised for years. What has changed is the availability of cheap, convenient index tools that allow investors to gain exposure to these factors. Kassam says smart beta indices account for roughly 2% of the roughly $9 trillion that is benchmarked against MSCI’s indices.

The conference proper began on Monday. The opening address was by Abdul Aziz Al Ghurair, the chief executive of Mashreq Bank. A member of the influential Al Ghurair family, he has a personal wealth estimated at $2.7 billion by Forbes Magazine in 2011.

OPTIMISM AND REALISM
Al Ghurair was followed by the economist Nasser Saidi, a former minister in the Lebanese government and now president of his own consultancy, Nasser Saidi Associates.

He gave a wide-ranging and statistic-filled talk about the economics of the MENA region that included both optimism and hard-headed realism.

Among the greatest challenges for the region is youth unemployment, he says. States will continue to be vulnerable to the kind of uprisings seen during the Arab spring so long as youths are out of work.

“Every year Egypt adds 750,000 people to its labour force,” he says. “More than two million in the past three years. What happens if you don’t find jobs for these people? They end up in Tahrir Square. The lifetime of governments becomes much shorter if they don’t find jobs.”

The challenge is acute since the MENA region has some of the highest population growth rates in the world. By 2025, there will be an estimated half a billion people in the region, up from 355 million today. Yet more than half of the current population is under 24 and youth unemployment across the region is at 35%, a worrying combination.

Saidi says solutions are possible. “What you have to do if you want to transform the region is have women participate in the workforce,” he says.

After Saidi came a rapid-fire briefing from RP Eddy, one of a handful of speakers brought in from outside the funds industry to give an outsider’s perspective. A former director of counterterrorism at the White House National Security Council who now runs his own consultancy called Ergo, Eddy is every bit the US security guru, sharp-witted, pragmatic and patriotic. His talk took in several of the world’s major security risks, such as Russian involvement in Ukraine, China’s growing desire to control its waters, and a potential détente with Iran. On the last point, Eddy said he was optimistic of a rapprochement with new Iranian president Hassan Rouhani, even though it went against his own past experience.

RISE OF ISIS
Perhaps the most topical part of his talk concerned the rise of the Islamic State in Iraq and Syria (Isis). The US along with allies in the Gulf countries announced air strikes on Isis targets only a matter of hours after Eddy’s talk, an intervention some in the US think should have happened sooner. Eddy argued that the real challenge is to prevent Isis gaining strength and legitimacy among the people in the land it now controls, something it will do if it can successfully provide healthcare, food and other services – a model that has helped groups such as Hezbollah hold on to tracts of land in the Middle East.

Another speaker who discussed geopolitics at length was Hasnain Malik, head of frontier market strategy at Exotix Partners, a specialist emerging market asset manager. Malik gave an overview of frontier market equities, giving his opinions on how different markets would suffer or prosper in the coming years.

He was bullish about Oman, whose equities are trading at their lower price-to-book multiples in years. Sri Lanka, meanwhile, has an enviable geographical position from which it can serve the shipping industry. In addition, Sri Lanka has cannily cultivated an alliance with a useful partner, China.

Malik was less optimistic about Kuwait, which is the largest constituent of the MSCI Frontier Market index now Qatar and UAE have graduated to emerging markets. Kuwait has been hamstrung by deadlock in parliament and there are signs the opposition is voicing frustration outside the chamber, a worrying development. In addition, many Kuwait-listed companies do business in Iraq and will be affected by the recent turmoil there.

“Kuwait is a place you can’t ignore,” he says. “There are big stocks that have international exposure, yet a lot of that exposure is in Iraq. It’s not clear federal Iraq can repair damage done in the last six months.”

Later that day, Ryan Lemand, senior economic adviser to the Securities and Commodities Authority, the UAE regulator, chaired a panel looking at the needs of the capital markets in the region. Mark Friedenthal, head of asset management at Abu Dhabi Commercial Bank, says the market needs support for derivatives, short selling and securities lending, all of which assist institutional investors in their risk management. He also suggested a relaxing of the minimum float requirements for initial public offerings, to encourage more listings. On the positive side, he was optimistic about talks of a merger between the UAE’s two main exchanges.

“We need a unified platform for trading securities. The discussions ongoing between DFM [Dubai Financial Market] and ADX [Abu Dhabi Securities Exchange] on a merger are positive,” he said.

LESS BUZZ?
The conference provided interesting speakers and opportunities to network with asset managers and investors. However, the organisers may have to stop the perception that there was less “buzz” than last year, a point more than one delegate made to Funds Global.