ZAWYA: The aftershocks of cheap oil 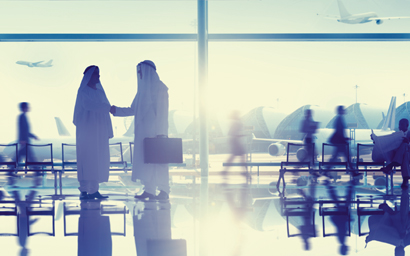 Regional equity markets fell again in the third quarter. A survey of Middle East fund managers suggests many are planning to cut their allocations to the region, finds Gerard Aoun.

Gulf Arab stocks took a hit in the third quarter when oil prices fell to their lowest levels since 2009 and global equity markets were shaken by concern over economic growth in China.

Saudi Arabia led declines with its main share index shedding 23% in the third quarter compared to the end of June 2015.

Dubai and Abu Dhabi’s indexes fell 14% and 5% respectively in the three months to September, which saw very low trading volumes.

China, the world’s second largest economy, is one of the main destinations for crude oil and petrochemical exports from the Gulf Arab region, and it is the second-biggest market for Saudi Arabia, the world’s largest oil exporter.

TIGHTENING
A Reuters survey of Middle East fund managers in October showed that 21% expect to cut regional equity allocations in the next three months, due to low oil prices and the prospect of monetary tightening, while 7% expect to raise them.

UAE markets remained heavily favoured, according to the survey, with half of the managers polled saying they expect to lift UAE equity allocations in the next three months, citing “appealing” valuations and the country’s diversified economic base.

For Saudi Arabia, the region’s biggest market, the number of managers reducing their overall exposure rose to 36% from 20% in Reuters’ previous monthly survey.

Riyadh-based National Commercial Bank said in a report in October that it expected the Saudi market to remain range-bound as investors adopt a wait-and-see stance ahead of corporate revenue announcements and the government’s budget announcement for 2016.

Over the weekend, Saudi Foreign Minister Adel al-Jubeir said in remarks published by Reuters that the kingdom’s financial deficit this year was manageable and that the country’s economic growth rate would stay strong. Jubeir’s comments came a day after Standard & Poor’s cut its rating for Saudi’s sovereign debt by one notch to ‘A-plus/A-1’.

Bahrain, which has been running deficits and building debt for some years, has come under more fiscal pressure due to the slump in oil prices given the size of its economy. Bahrain’s index dropped 7% in the three months to September 2015.

Egypt’s main index shed 14% in the third quarter compared with the end of June. Egypt has been facing a currency crisis due to what many economists consider to be an overvalued pound.

Earlier this month, the central bank allowed the Egyptian pound to weaken in a move which could boost exports but also increase an already large bill for imports of fuel and food staples. Tarek Amer will replace Hisham Ramez as Egypt’s central bank governor once Ramez’s term ends on November 26, in a move that has been welcomed by traders.

Middle East market sentiment has also been negatively impacted by uncertainty over whether the US Federal Reserve will hike interest rates this year, as well as geopolitical tension in the region. 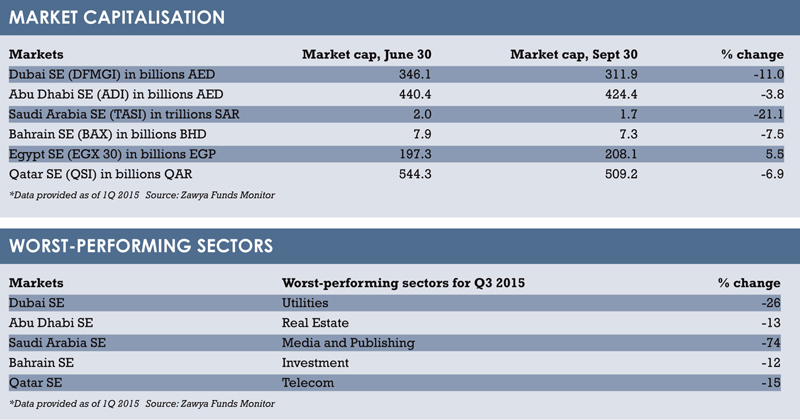