SIBOS ROUND-UP: When plumbers are let out to play 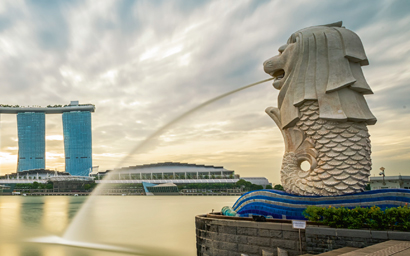 The Sibos financial messaging conference, held this year in Singapore, was a chance for the industry to mingle and chat about everything from T2S to blockchain technology. George Mitton reports.

The weekend before the Sibos conference began, I walked down to the waterfront in Singapore harbour beside the Merlion, a statue – half fish, half lion – that has become a symbol of the city state. Sitting in the evening’s sauna-wet air, I became aware that everyone around me was concentrating their attention on the other side of the water.

There came a distant fanfare, drum rolls, lights and suddenly lasers. Green bolts came shooting down from the roofs of the Marina Bay Sands hotel, an ultra-modern building consisting of three towers and a surfboard-like roof connecting them. To the gasps of onlookers, the lasers carried out their nightly show – rotating between green, white and red, looking every bit as imposing as an electronic Eye of Sauron.

It was the day before I would enter the convention centre of that building to report on the Sibos conference. If this is what happened on the outside, what marvels would be found within?

Sibos is a vast conference. The exhibition zone at this year’s event was spread over two floors, each large enough to fit a Boeing airliner or two. Almost every bank you can think of is represented, some with conference stands so elaborate they are like houses, with meeting rooms, bar facilities… even, in some cases, trees.

At the stands and in the conference rooms on a higher floor, representatives from the payments sides of banks, financial technology companies and asset servicing firms try to find their way through the intellectual maze that is the financial messaging world, where technical nomenclature such as ISO 20022 mixes with abbreviations such as T2S (Target-2 Securities). The finer points of banking architecture are discussed alongside the merits of differing settlement systems. Deals are struck over coffee or champagne.

The firms represented at Sibos are often described as providing the ‘plumbing’ of the world’s financial system. If so, Sibos is when plumbers are let out to play.

ON THE BLOCK
What was on the minds of these esteemed plumbers at this year’s outing? One unavoidable topic was blockchain. The technology, made famous by Bitcoin, has vast potential to make financial messaging more efficient by allowing complex databases to be decentralised. The system can maintain, say, a ledger of financial transactions (this is how Bitcoin works) that is simultaneously accessible to all participants and yet tamper-proof. A number of technology firms are hoping to apply blockchain technology to financial payments, among them US-based Ripple, which was presenting its offering at Sibos.

As you would expect, technology that has such potentially large ramifications was eagerly debated. If the believers are right, blockchain technology has the potential to do away with all centralised accounting and book-keeping entities. Perhaps even central securities depositories (CSDs) could be rendered obsolete by blockchain. However, some have doubts.

“The idea of distributed processing and distributed ledgers is interesting and could have applicability,” says Thomas Zeeb, chief executive of Six Securities Services. “But I don’t believe the statements being bandied about that you can reduce your headcount by 97%. There’s a limit to what you can take out of an organisation and still meet your responsibilities as a bank.

“A bank is required to hold your assets in a segregated account that is reconciled daily with a depositary. Even if the bank goes belly up, your assets are safe. How do you deal with that in an environment with distributed processing, where assets are passed around a load of institutions you don’t choose?

“You can’t ignore the potential benefits of these innovations, but our mandate is not to have the newest whizz-bang technology, it’s to ensure a robust infrastructure and safety of the assets.”

SHIFT SYSTEMS
Another topic that provoked discussion was the question of settlement cycles and how to adapt to them. The US is planning to move from a system of T+3 (three-day cycle) to T+2 to bring itself into line with the rest of the world. But what about the likes of China, which operates an idiosyncratic system of T+0 for stocks and T+1 for cash? Another market that operates a T+0 system for equities is Saudi Arabia, presenting similar headaches for offshore investors.

There seems little sign that either China or Saudi Arabia will modify their settlement cycles soon. The industry will have to adapt. The situation will become pressing when and if these two markets join key indices such as the MSCI Emerging Markets index, after which many more institutional investors will have to start allocating money to them. What’s the solution? It may be that finance professionals will have to start working shifts.

“I’ve been predicting for years that global investors will no longer be able to operate a nine-to-five office policy,” says Tony Freeman, executive director of industry relations at Omgeo, which is owned by the DTCC. He takes the example of Sydney, where there is no overlap in the typical working day with London. “Australian firms use custodians to do some outsourcing-type activities, but the simplest change is to introduce a shift system. They can’t avoid it. If a large fixed income transaction is going to fail, even for a day, it’s going to cost money.”

New initiatives such as a planned London-China Stock Connect will help the case for extending working hours. Perhaps banking will one day emulate the many industries where 24-hour working patterns are common, such as aviation.

FUNDS ON THE RISE
Readers of this magazine will be pleased to hear that the funds industry was frequently discussed at Sibos. This attention is a relatively new development. In previous years, Sibos was mainly focused on cash banking only. Now, the funds divisions of the banks often attend.

The attraction of the funds industry is an opportunity to cut costs with automation, a development that has led to a healthy pipeline of new clients for firms such as Clearstream.

Indeed, according to Jeff Tessler, chief executive of Clearstream, “some of our clients no longer think of us as an ICSD, but a provider of fund services”.

Tessler says the funds business has grown by a fifth in the past year in terms of revenues. In terms of the asset base handled by Clearstream, the growth has been even higher.

“When dealing with multiple TAs [transfer agents], a lot of banks are realising there’s not much proprietary value in managing these relationships. Most say it’s a gigantic nightmare. It’s expensive. They’re asking the question, ‘Do I need to do this myself? Is there a trusted third party to do this for me?’”

Several other fund-focused companies were present at Sibos, ranging from Clearstream’s competitor, Euroclear, to the likes of Calastone and Fundsquare. In their own way, each of these firms believes it can improve efficiency in the funds industry by upgrading or developing the plumbing that connects asset managers to their custodians and them in turn to the end investor.

HOME TIME
Sibos, ultimately, is about networks. It is a time for the world’s banks and payment firms to get together and discuss how they can stay connected in the year ahead, both professionally and socially. As I left the conference closing party, I reflected that perhaps those lasers with their mesmerising display of crossing and uncrossing beams were a kind of symbol for what Sibos is about: connectivity.