Kuwait’s stock market rose after its government revealed a five-year development plan. Equity performance elsewhere was mixed in the first half of the year, writes Gerard Aoun of Thomson Reuters. Oil didn’t provide much of a lift to Gulf markets during the first half of 2017, with crude prices stuck in a range of between $44-$55 a barrel. OPEC and non-members led by Russia met in late May, agreeing to prolong output cuts by nine months to March 2018. That disappointed markets, which had hoped the producers would reach a last-minute deal to deepen reductions or extend them until mid-2018. Nevertheless, the Kuwait bourse’s main index rose nearly 18% in the first six months of 2017, outperforming Gulf peers. The Kuwaiti benchmark jumped nearly 19% in January alone as local and regional investors took positions ahead of the government unveiling a $100 billion five-year development plan. The plan will include $15 billion of investments in 2017-18 aimed at diversifying the economy from oil, while Kuwait’s 2017/18 budget also projected a much lower deficit than the preceding year, despite a planned increase in state spending. Kuwait’s bourse held on to most of its early-year gains as better-than-expected first and second-quarter earnings boosted sentiment. Bullish banks
Saudi Arabia’s index added 3% in the first half of 2017, a modest gain considering the banking sector achieved some of the region’s best first-quarter earnings. The bullish bank performance was largely due to rising interest rates boosting margins and improved liquidity conditions following the government’s mammoth bond issue. Saudi’s bourse, the Tadawul, introduced the T+2 settlement cycle in the second quarter, allowing settlement of trades within two working days, in a move expected to boost the kingdom’s chances of joining the widely followed MSCI Emerging Markets index.

In June, MSCI added Saudi to its watch list for a potential upgrade. Emerging market status would bring billions of dollars from foreign funds into domestic equities. In June, Saudi’s bourse outperformed regional peers, surging 8% after Mohammad bin Salman became crown prince and MSCI made its long-anticipated announcement. Elsewhere in the Gulf, Dubai’s index fell about 4% during the first half of the year 2017, while neighbouring Abu Dhabi dropped roughly 3%. Dubai’s index fell around 4% in March alone. Daily traded volumes have been lacklustre all year, with activity mainly focused on the more speculative shares in lieu of fundamental drivers to move blue-chip stocks. Abu Dhabi’s index made a 1.8% gain in April as First Abu Dhabi Bank added 5% following a merger that created the UAE’s largest bank, with assets worth $186 billion. The boost was insufficient to turn overall market sentiment bullish. The outlook appears to be brightening, with a Reuters poll of 13 regional fund managers in September revealing participants are positive on UAE markets. Some 30% of fund managers polled expected to increase their UAE equity allocation, citing relatively attractive valuations versus peers and other emerging markets. Third-quarter gloom
In a report posted on its website on September 29, FTSE Russell announced results of the FTSE annual country classification review. FTSE Russell said Saudi Arabia was close to an upgrade and would be assessed again in 2018, while Kuwait would be classified as a secondary emerging market. 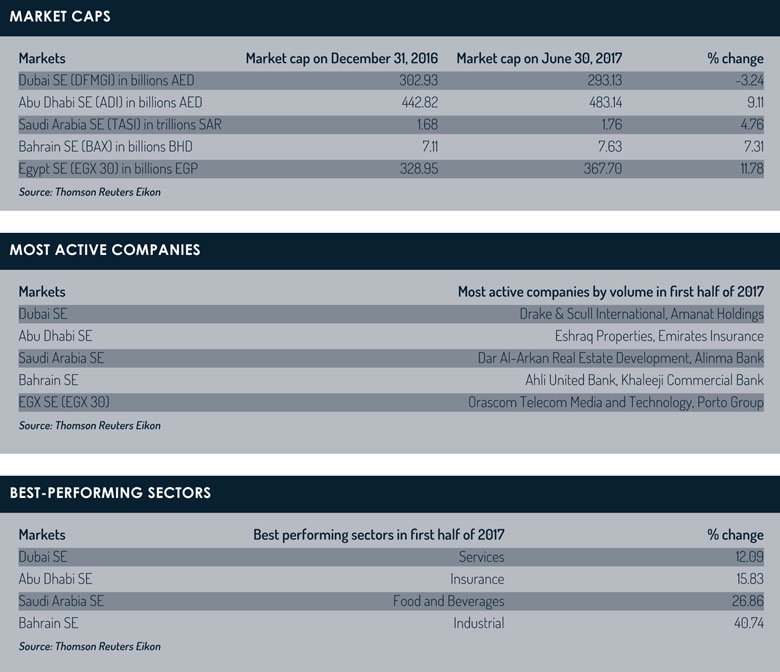 Geopolitical tensions weighed on sentiment across global markets in September as concerns over North Korea’s largest nuclear test caused an equity sell-off. Investors shifted instead to safe havens such as the Japanese yen, gold and sovereign bonds. OPEC’s secretary-general gave a boost to oil prices in late September, predicting higher oil demand for the rest of the year, which should lead to more reductions in oil inventories. Gerard Aoun is the community editor of Thomson Reuters’ Trading Middle East ©2017 funds global mena